Gatlin IoT Farming Platform, aiming to utilize cryptonetwork utility to run algorithmic transaction to do transactions based on developing automated and efficient networks to grow food and add a tangible back to an intangible currency. Pooling resources to grow food and promote healthier and more sustainable land management.

Main Cliffs About The Project

I appreciate the Kotlin member for allowing me to post this hear. It’s been a good help to get this out on paper.

I am unable to make update edits to the post, so I have to reply.

Update:
I am moving forward with the regex approach to various information digestion. Namely, in circumstances where I will be getting graph data, multidimensional matrices and things of that nature, the project is now moving to develop digestion techniques based around about character/value recognition at the door instead of computation.

Using the multi-line string capability in Kotlin I was able to digest index and value information from a multidimensional matrix using only the definition of the matrix in string form and then utilizing regex to pick out the values from non-important data and map it with a single line. I am very stoked. This will make linear algebraic operation a lot easier and cleaner than using nested looping techniquesr.

I am pushing the String approach because I believe it to be a better way to approach the cost of calculating. Instead of finding out too late that my process is far to much for me to handle, I can now assess it as a string, dynamic and precise, it is a set of different patterns of data instead of reifying the actual value it is meant to represent. To make it more clear, understanding that infinity is limitless and a concept of eternal, it is an entirely different thing to sit down and try to compute number so absurdly large that the mere conceptualization is neigh impossible.

To break it down more, saying “no thanks” before you open the nasty grams of non-viable requests is a huge step forward.
I can define and provide integrity while not having to risk costly digestion processes as the process acknowledges the value exists, but it doesn’t try to allocate space to reify it allocation.

Last update, I am starting perl and am hoping to do some integration more with Kotlin using it. Perl can do embedded systems, and from what I can surmise, do it very very well. Syntactically, I would like to test its incorporation to build out NLP AI that can recognize certain scripting languages and proceed in an unsupervised fashion to communicate to each other utilizing the more colloquial syntax that Perl provides as saying “my banana” has more meaning to NLP than does “var Banana”.

That is a good update and development in this sphere.

This is the floor plane coordinate plot used. The borders are single space literals, and the lim
it’s returns are the carriage returns that down-
-
-shift the integer values.

This serves as a mapping of general peripheral locations on a larger scale and allows for more
granulated mappings. This is a cursory prototype, but in the end I am pushing for the recognition of color through hex values on a map overlay as the object of ingestion.
This is just a small scale conceptualization that it is possible.

I have not yet implemented the above steps in the repository yet as I intend to make changes I will have to downshift / upshift depending on ranges. The mechanisms of generating the data grid are better sequential, small and incremental as it better allows me to debug unintended output. As it sits right now, I plan to use this grid ingestion/digestion method to run configuration scripted to the peripheral devices of a set area of land. Each map should be able to granularize an array and for the UI we can have a literal representation of that our pipe was initiated as and allows us to better move peripheral devices.

This mapping sequence only needs to run once as it should establish a tangible area and would allow the mapping and remapped of peripheral objects as the data grid will have coordinate values for the map and can zero out and re-initialize a different position on the map.

Thats the progress, roadmap and reasoning I have with the project. I use monospacing for the current implementation and the grid above is just to help conceptualize the idea

-I still might have made a mistake in writing this, and if so I apologize.

Quick Update. The project is now called: NerveBus, and I am repurposing the work done to better fit the actual modelling 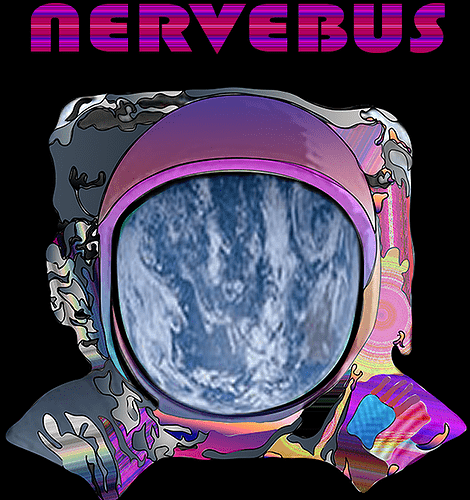 The Stack is as follows, and if anyone reading this has any feedback, it’d be much appreciated.

I personally do better with a visual aid/data-flow diagram, so here is the build out: 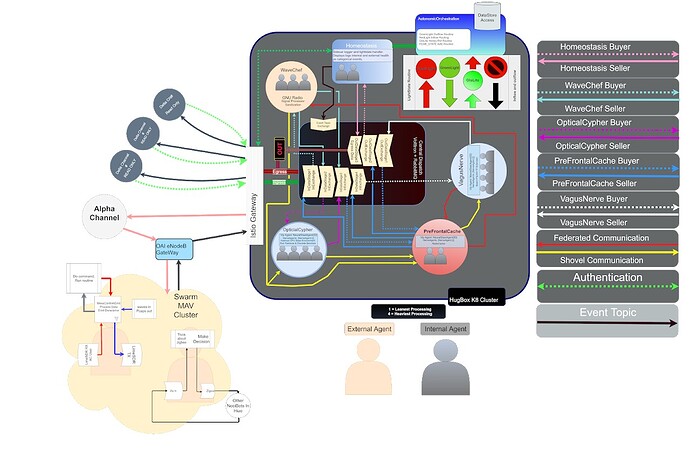 The MAV Swarm originally meant a MAV Swarm with a semi-decentralized hive mind, so the wording on that is needing to be changed. However, I want to replace it with a mesh network of peripheral devices.

Also, the Alpha Channels and Delta Channels aren’t going to be used and instead, the OAI eNodeB is now to act as a “Bastion Server” hopefully using some C/++ Interop.

I am looking to implement Akka Streams, and I’ve been working to learn better the concepts of concurrency, async parallel processing, crash management and data flows in the Actor Paradigm. Needless to say, it is a fascinating subject but also one that can make the head hurt.

Sub System: Homeostasis: K8 Clusters have a built in side-car. So the ingress data will be event driven, and after that I’d like to have different Akka Streams to handle the ingress data stages and egress data stages. The Homeostasis subsystem also handles the system transition of state using the BBBarrier Agent (Blood Brain Barrier Agent) to handle whether the message is escalated to induces a change of state and data flow.

Sub System: WaveChef - I’m looking to implement GNU Radio Recipes to handle signal sanitization to account for potential malicious subpacket injection from the Sigover attack vector and other potential security issues. It will need to do a decibel strength and latency check as the margin of error in is getting slimmer by the day and having to account for systems already accounting for chip corrections at a circuit level is a very big uphill barrier.

Sub System: Optical Cypher - This will revamped as I want to start implementing a type of “fluid” encryption based on mnemonics and vernacular. In essence I’d like the end stage to be NLP AI being able to be like Navajo Wind Talkers as encryption. Using Object Recognition and sentimental analysis, I’d like to be able to toy with the idea of unsupervised learning to see if a “local” vernacular can be established and utilized to encrypt and decrypt messages. The best secret is the one no one can understand.

Sub System: PreFrontalCache - I’m looking at using a Redis Cache to store messages and transactions still in flux as to better know how to re-allocate resources. The pipeline is modelled after infantry division commands, so “divisions” will be able to do strategic re-allocation of power further down range.

Sub System: VagusNerve - This is essentially the mainline of communication with the datastore and the outside system. I want to incorporate the idea, however, I don not know if it would necessarily fit with the principles of the Actor Paradigm.

The data store as of right now is mainly PostgreSQL. It has the no-sql capabilities with the bson/json, it should be more than capable of handling warehousing needs, or I don’t see where it would fail. Again, this is a question I have that I don’t know how to find the answer to.

That covers it for now, I am currently working on getting the documentation back as shady OSSINT and Infosec companies hacked me last October destroying the project and prototyping that went with it. I’ve only managed these two resources and I’ve lost a fair amount of the technical knowledge. Given the scope of the project, it would have been extremely unlikely I could retain what I lost if I cannot access the docs.This does, however, provide a lot more structure around a massive project.

A journey of a thousand miles starts with a single step.
And, if the wind will not serve, take to the oars.
So I’m out here, rowing.